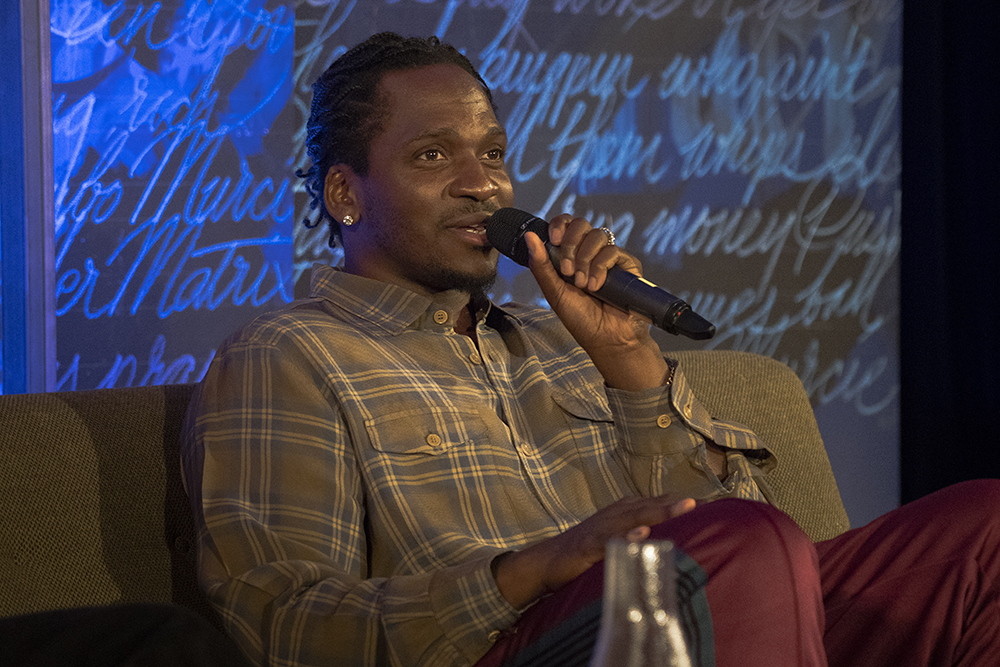 The American music artist is put on the spot in an insightful Q&A in Berlin.

Pusha T is an American rapper and record executive, the 41-year-old first finding fame with the hip hop duo Clipse before going on to find solo fame working closely with Kanye West.

He spoke to Red Bull Music Academy in Berlin about working with Kanye – complete with his best impersonation of him – and his lyrical rivalry with Drake:

What was it like growing up in Virginia?
Virginia beach isn’t really a big city, and I think that’s what makes it so special about everything that’s come out of there. It’s a military town actually so when it came to musical influences, I always knew about what was going on in southern hip-hop, bay area hip hop, of course New York. New York was a heavy influence. But it was just a small town with a lot of different influences, and I would probably base that on the military first.

What’s it like working with Kanye West?
When it comes to me, he always tells me “your voice is the instrument. Like I gotta strip down every song for you, you’re more of an instrument than I am this time”. He sort of, to me, found my sound. He’s found the new Pusha T sound musically. If you go to numbers on the board, to nostalgia, the games we play today, you go to Come Back Baby, he found that sweet spot.

How does the process come about of you and Kanye making the records?
What we do is, before going into Wyoming [where they record] right, I just go around and talk to producers new, young, whatever, I hear anything that I like and I take it. I rhyme to it, I rap to it, lay it down and just store it. When I’ve found basically my voice on the project and I’ve found the direction and the whole them of the project, I take it to Ye, and go “yo, I’ve got my album”. Nine times out of ten he hasn’t heard the verse, I may have given him the beats, and he’ll be like “Oh, I like that one” or “I don’t like that one” so between me picking, and between him going through that, I write all of those. And then I let him hear it, and then be like “yeah, we got the album, what’s up, let’s round this out real quick”.

Was that the same on the latest album, Daytona?
A lot was going on at the time with him, and he was like “hey man, I think I can actually do this better” and I was like “alright” but I was ready to come out, like I was fuming inside. And he was like “I think I can do this better” and I was like “you do know that you picked all of these beats, you did this, you A&R’d this project?” and he’s like “I know man, I’m just telling to I can do it better” just go away, like I need some therapy. I felt like he was just asking just to get his head in a different space. And I was like “alright, let’s do it. Let’s just go out there” and I mean, it was quick, a few days, four days, a week, we were up in Utah in the mountains, in a house a studio built out, getting to it.

Can you give us your best Kanye impression?
We’ll find something great like that in that vein, and I’ll do it and fall in love with it, and then he makes a crazy beat like Santoria or something. And then he’s like “see this is what I’m talking about, this is what it needs to be. I ain’t trying to hear that shit”. It turns into shit, it’s crazy, it’s like, he does this great convincing job of like “listen man, this is your sound, you can’t abandon your sound”, and I’ll be like “yo man, it’s one song”, “like, no, we want one song, we don’t, we want it all like this”. Everybody comes in the room, they’re like, I think he’s right, I have no backing, no nothing.

How did the artwork come about for Daytona?
I was doing a video promo with no album artwork, and the album was coming out the next day. I found a great photo of myself, I’m happy with it, like I like pictures of myself on my album. I like myself, I wanna be seen, yes, I don’t think that’s a lot to ask. At 12, 1 o’clock in the morning, I get a call, and it’s him, and he’s like “hey man, I just don’t feel like this art is capturing the greatness of what’s on this album”. And I’m like “first of all, it’s a picture of me, I had better be capturing the greatness of what’s on this album, like what do you mean?” “no, I’m telling you like, I’ve got this idea, I’ve got an idea, just let me get back to you, but we’re not putting that out quite yet, ok?”

What about the Drake rivalry, can you talk a little about that?
It’s the competitive spirit, I mean, he puts out records what he says, and it’s just about combatting that and coming back at it lyrically. That’s what it is that I do. I feel like that’s another aspect of what that competitive spirit is, just standing your ground and doing what you believe in.